Last week, the Minister for Science and Innovation (MICINN) of the Spanish Central Government, Cristina Garmendia, accompanied by Paulino Rivero, President of the Canarian Government and JosÃĐ Regidor, Rector of the University of Las Palmas G.C. (ULPGC) inaugurated the renovated facilities of the Spanish Bank of Algae (BEA), as a service of the ULPGC. 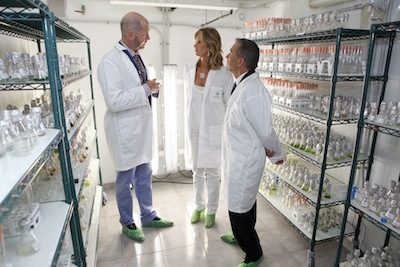 The BEA, promoted several years ago by the ULPGC, has been recently granted with 2.6 MâŽ by the Spanish Government, through the action âNational Strategic Plan for Microalgaeâ, for being consolidated as a Deposit International Authority according to the Budapest Treaty. After that investment, the facility, located on the east coast of Gran Canaria (Canary Islands, Spain), is configured, in the words of the Minister, as the "national initiative" for research and industrial development through the potential use of algae.

âOur Government considers that research in algal biotechnology is going to be an added value for the industryâ, Garmendia pointed out, ânot only as a promising source of biomass for biofuels and CO2 biofiltration, but to another possibilities for important sectors of the Canarian Archipelago, Spain and the international economy, like agro-food, pharmaceutical, biomedical or cosmetic usesâ.

The Spanish Bank of Algae holds the only authorized culture collection in Spain of tropical and subtropical microalgae, cyanobacteria and extremophiles, particularly from the Macaronesian region. Objectives include sampling, isolation, identification, characterization, conservation and supply of strains and genomic DNA for scientific and industrial purposes based on microalgae cultures and applications development. Prof. Guillermo GarcÃ­a Reina, Director of the BEA, indicated that the Canary Islands ââĶis one of the hottest points in worldâs biodiversity, that makes sense in the interest of scientific and political authorities to promote this activity in the islandsâ. âThere is also a clear necessity to diversify economical activities apart from tourism in the Archipelago and perhaps, the development of an industry starting from microalgae cultivation might be the way to the futureâ president Rivero appointed. 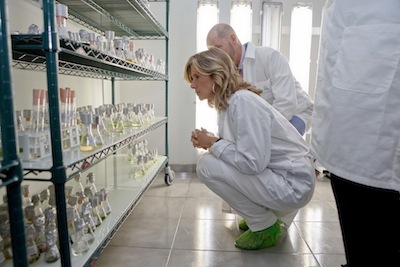 In this respect, one of the main aims of the BEA is to be a tool to the service of the National System of R&D&I and to put in value the scientific and technological strengths that Spain hoards in this field. Spain relies on scientific institutions, technological centres and international leading companies that have recently increased their activities at this area. With the BEA consolidation, the Canary Islands are positioning as a suitable territory for RDI projects development in algal biotechnology, since it brings scientific-technological possibilities together with exceptional geographical and climatic conditions.